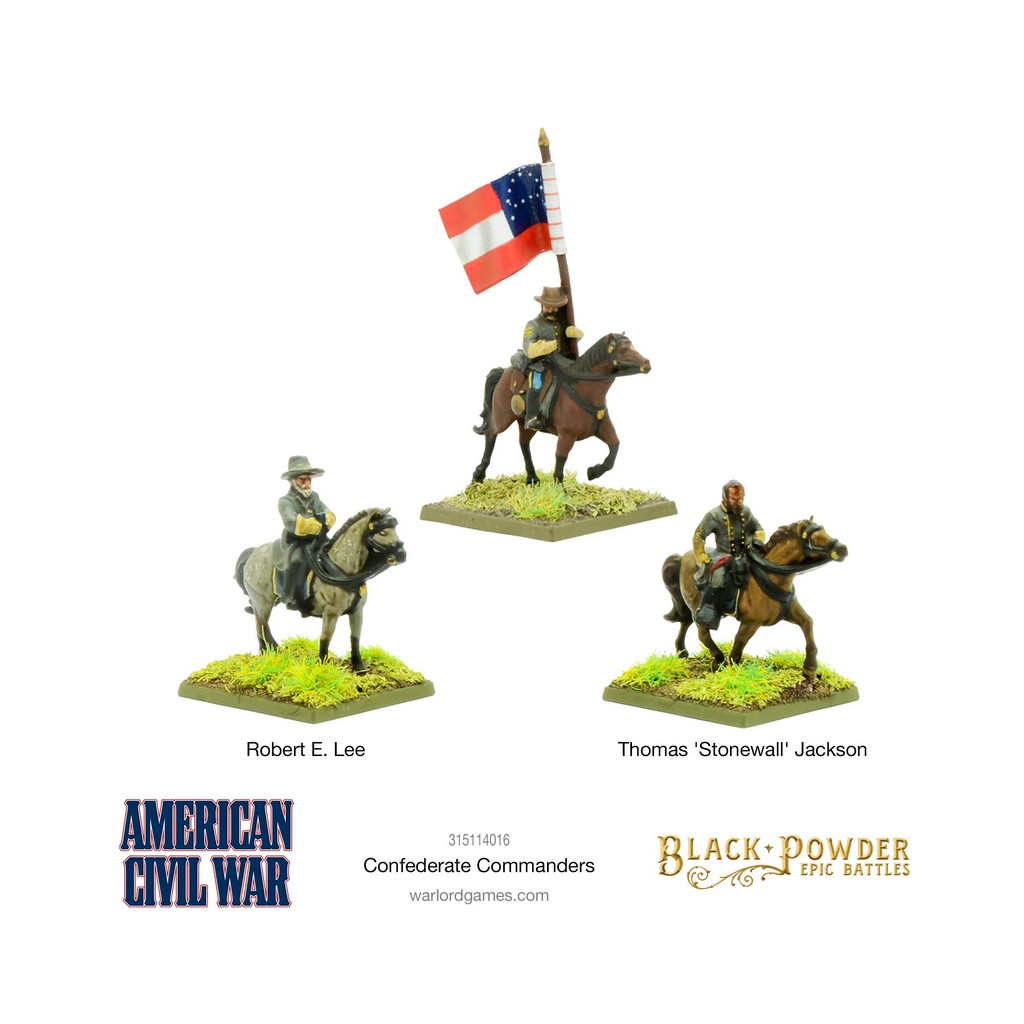 Robert E. Lee: The son of ‘Light Horse Harry’ Lee, an officer who served in a previous rebellion, Robert Edward Lee graduated top in his class at West Point at the start of his military career. He was an accomplished officer and had served across the country and provided staunch service during the Mexican War. When Virginia seceded Lee felt bound to his native state and resigned his commission in the Regular Army, offering his services to Virginia and the fledgling Confederacy. Famously, Lee was offered command of the Union forces about to head south, but felt honour bound and declined.

During the next four years he proved to be one of the greatest battlefield commanders and tacticians of his age. He invaded the North late in ’62 and held McClellan again at Sharpsburg (Antietam). On the strategic defensive in early ’63 he defeated The Army of the Potomac at Chancellorsville in May where Jackson fell. On the offensive in June he led his army into Pennsylvania and the climactic battle of Gettysburg where he was checked by Meade.

On the defensive, Lee was initially able to match and hold Grant as he bore down on the Confederacy in ’64 and ’65, but eventually no amount of tactical genius could offset the numerical and technical superiority of the Union. With his lines around Petersburg breeched Lee abandoned the city and Richmond and struck out west trying to avoid the circling Union armies. Eventually Lee was compelled to surrender himself and his army to Grant at Appomattox Court House on April 9th, 1865.

Note that this figure has a brand-new pose and differs from the ACW pre-order exclusive figure.

Thomas ‘Stonewall’ Jackson: Jackson is one of most able Confederate commanders and is only eclipsed, perhaps, by Lee. Thomas Jonathan "Stonewall" Jackson was an instructor at the Virginia Military Institute when war broke out and offered his services to his native state, Virginia. At First Manassas he won immortality when his brigade held its ground in the face of a heavy Union assault. A fellow officer, noting Jackson’s brigade and trying to rally his own men, called out: “Look, there stands Jackson – like a stone wall!” The name stuck.

Jackson was placed in command of the Confederate forces operating in the Shenandoah Valley and promptly lead his Union opponents a merry chase. By a series of forced marches with his infantry, or “foot cavalry” as they became known due to their speed, he was able to surprise and defeat all the Union forces sent against him in isolation. His antics were largely aided by the fact that he had a much better map of the Valley than his opponents – reputedly 10 ft long! At Antietam his corps held all of McClellan’s uncoordinated assaults despite heavy losses and at Fredericksburg his troops performed the same duty. In May of 1863 he and Lee masterminded a flank assault that broke Hooker’s will and drove the Army of the Potomac north. It was at the moment of his greatest success that he was accidentally shot by his own men on the evening of the 2nd May while reconnoitering the Union lines ready for a renewal of the action. Carried from the field, his left arm was amputated but complications ensued and he died on the 10th May 1863.